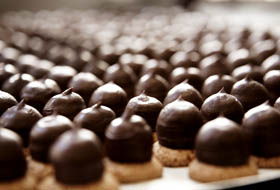 Originally these cookies were named mini-Sarah Bernhardt. However, during the Second World War, it was observed that the cookies resembled the radio buttons that one turned on to hear broadcasts from the BBC. Consequently, the cookies became known as Radio Macaroons and as a resistance cookie.

The Radio Macaroons consist of macaroon bases topped with chocolate
truffle and dipped in chocolate.